A better knowledge of the physiological basis of salinity tolerance is 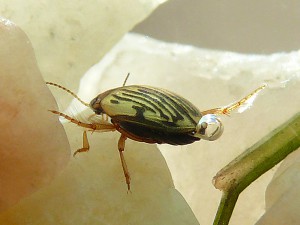 essential to understanding the ecology and evolutionary history of organisms that have colonized inland saline waters. Coleoptera are amongst the most diverse macroinvertebrates in inland waters, including saline habitats; however, the osmoregulatory strategies they employ to deal with osmotic stress remain unexplored. Survival and haemolymph osmotic concentration at different salinities were examined in adults of eight aquatic beetle species which inhabit different parts of the fresh—hypersaline gradient. Studied species belong to two unrelated genera which have invaded saline waters independently from freshwater ancestors; Nebrioporus (Dytiscidae) and Enochrus (Hydrophilidae). Their osmoregulatory strategy (osmoconformity or osmoregulation) was identified and osmotic capacity (the osmotic gradient between the animal’s haemolymph and the external medium) was compared between species pairs co-habiting similar salinities in nature. We show that osmoregulatory capacity, rather than osmoconformity, has evolved independently in these different lineages. All species hyperegulated their haemolymph osmotic concentration in diluted waters; those living in fresh or low-salinity waters were unable to hyporegulate and survive in hyperosmotic media (> 340 mosmol kg-1). In contrast, the species which inhabit the hypo-hypersaline habitats were effective hyporegulators, maintaining their haemolymph osmolality within narrow limits (ca. 300 mosmol kg-1) across a wide range of external concentrations. The hypersaline species N. ceresyi and E. jesusarribasi tolerated conductivities up to 140 and 180 mS cm-1, respectively, and maintained osmotic gradients over 3500 mosmol kg-1, comparable to those of the most effective insect osmoregulators known to date. Syntopic species of both genera showed similar osmotic capacities and in general, osmotic responses correlated well with upper salinity levels occupied by individual species in nature. Therefore, osmoregulatory capacity may mediate habitat segregation amongst congeners across the salinity gradient.

This entry was posted in Uncategorized. Bookmark the permalink.